The Wimbledon Final 2014 was played on Sunday, and it was one of the closest and highest quality encounters between two fantastic players that I have seen recently!

Right from the very first games, it was evident that both Roger Federer and Novak Djokovic were arriving in peak form, with very few errors and excellent shot placement. The high quality was evident, as both players held their service games in the face of strong hitting from the other side of the net.

In the first set, it was Roger Federer who came out the victor, despite very nearly dropping the set by going behind early in the tiebreak. Federer was able to use his serve as a weapon to get him out of a tight situation, which we will talk about in more detail shortly.

In the balmy conditions on centre court, neither player gave an inch, with Novak Djokovic fighting back hard over the next two hours to grab the second and third sets. In the fourth, Federer was down 5-2, but somehow managed to save a Championship point and win the next 5 consecutive games to push his Serbian opponent to a deciding fifth set.

Although it was Djokovic who prevailed in the fifth after a titanic struggle, fans were privileged to watch some of the best tennis that has been on offer in recent memory.

So how did Djokovic overcome the Swiss Master in the Wimbledon Final to win his second Wimbledon title, and what were the major factors that affected the match? As your online tennis coach, here’s my analysis.

Service Strength – Under the guidance and mentoring of Stefan Edberg, Federer has modified his game to really put a lot more power and emphasis on his serve. While his serve in the past has been consistent and precise, it has never risen to being considered one of his greatest weapons.

Throughout this tournament, however, Federer completely dominated with his serves, which were truly excellent. During the Wimbledon final, he fired down 29 aces past Djokovic, and completed 69% of his first serves, compared to Djokovic’s 13 aces and 62%. He was also more effective than his opponent when he got his first serve in, winning 3 out of 4 of those points. The other huge advantage to delivering such a strong serving performance was that he only gave Djokovic seven chances to break his serve, with the Serb only able to convert three of those.

Tactics – A feature of Federer’s game this tournament has been his willingness to come to the net to attack the ball. He certainly continued this aggressive approach during the final, with a total of 67 net approaches. However, he was unable to convert the approaches as effectively as he had done in previous rounds, only winning 2 out of 3 points at the net. This was likely because Djokovic was dominating the longer rallies and pushing Federer further behind the base line meaning his net approaches were not as effective. Federer had farther to run to the net, giving Djokovic the opportunity to hit strong passing shots past him, which he did regularly. 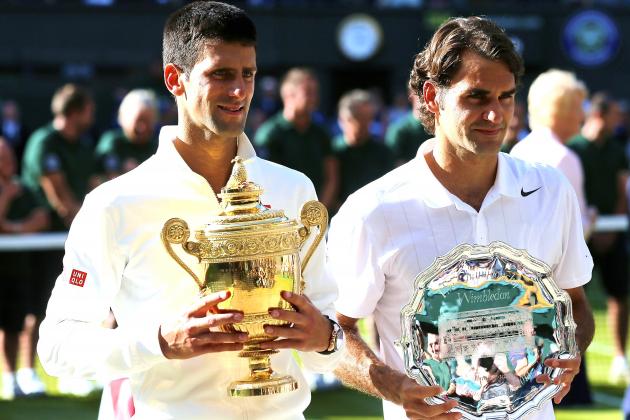 Conditioning – Novak Djokovic is a superb athlete. His physical conditioning and ability to maintain the strength of his shots and footwork over long matches is a stand out feature of his game, and was a big reason he prevailed. In contrast, Federer is slightly older, and five set games are tougher for him now than they were 5 years ago. His age was likely the reason for the drop in his speed in getting to some tough shots. It also showed at the start for the fourth set and in the fifth with his energy visibly dropping and Djokovic capitalising on the scoreboard.

For Novak Djokovic the win at the Wimbledon Final breaks a recent string of runner-up results in Grand Slam finals. Djokovic was clearly emotional and relieved, dedicated his win to his future wife and baby as well as his first coach who recently passed away.

For Roger Federer, he has strongly answered his critics who questioned whether he was still good enough to win Grand Slam finals. Over the five sets, only two games separated the players at the end of the match, showing just how close the final was.

Federer has the support of the Wimbledon crowd, who regard him as a favourite (when he isn’t playing Andy Murray!) and many would love to see him win his 8th Wimbledon Title before he retires. To those fans, including me, Federer said “I’ll see you next year”. I will definitely hope to see him in next year's Wimbledon Final.

With the new guard led by teenage sensation Nick Kyrigos and the fast-improving Grigor Dimitrov scoring big upset wins over Rafael Nadal and Andy Murray, it was still two members of the “Big 4” who showed their class and talent in the final.

With the US Open yet to be played, it will be fascinating to see how the men’s field, which is more closely matched than ever, shapes up in final Grand Slam of the year.

From "Wimbledon Finals 2014: My Post Match Analysis" To "How To Play Tennis Efficiently And Become A Better Player"