The Many Roles of a High Performance Tennis Coach

As a keen volleyball and tennis player for most of my life I have met many coaches, all of them bringing their own unique approach to the job. Now, as a coach myself, and your online tennis coach, I have a greater appreciation for just how difficult the coaching role is.

Because of that, I can imagine the pressures and wide array of considerations that must come with being a truly elite tennis coach. Watching the Australian Open recently made me realise that the men and women sitting in the coaches boxes, many of them former champions themselves, were often even more stressed and tense than the players they were mentoring.

So what are the main roles of a true high performance tennis coach?

When players begin learning the game of tennis, it is common to find them in small group classes of between three and six students. However, as the better players progress up the ranks and get older, coaches must train them one on one to truly unlock their potential.

As a result, one of the first tasks for any high performance tennis coach is to build a strong working relationship with their player. It is important to note that this does not mean that the player and coach must be close friends. It is often the role of a coach to provide feedback on how a player can improve, and this is sometimes better coming from a figure who is not as friendly to the player.

A failure to build rapport and a strong working relationship can result in distractions and poor performances on the court and the need to change coaches, as we saw with Andy Murray in 2014.

Most elite and high performing tennis players are highly motivated and competitive individuals who obviously want to win as many matches as possible. The role of a high performance coach in this regard is to work with a player to set specific goals to focus their energy on.

For example, for a rising star the goal could be to break into the top 100 by the end of the calendar year, while for more established players coaches might research and identify the tournaments that their player has a realistic chance of winning.

It is important for high performance coaches to perform strong research and stretch their players, while also ensuring that the goals they set for them are within reach, as failure can be counterproductive if it is sustained over long period. 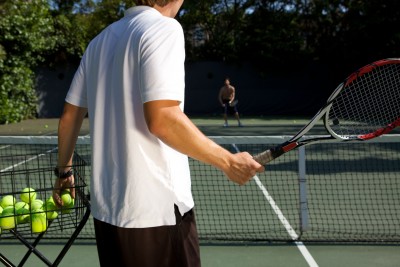 The demands of mentoring a high performing tennis player are extensive. For this reason, it is incredibly rare to find a coach or mentor who divides their focus among multiple players.

High performance coaches must not only know the strengths and weaknesses of their players game, they must also be able to read their mindset and attitude. Doing this requires dedication and a single-minded focus. In addition, coaching multiple players can lead to conflicts of interest if they ever met in competition.

Lower grade coaches tend to provide consistent advice to all of their players. However, a high performance coach will tailor their coaching to fit the strengths of their player.

An example of this approach has been the tweaks that Stefan Edberg has brought to the game of Roger Federer. Edberg recognized that Federer’s game would benefit from shorter points and attacking the net more, which has led to Federer playing more volleys since Edberg began coaching him.

Modern day players have many demands on their time from tailored strength and conditioning programs to travel and even sponsorship commitments for the top players. This means that their chances to sit down and analyze their opponents are limited.

This is where a high performance coach can step in and add value. Through their experience they can work to break down an opponents game and come up with a game plan to defeat them. This strategic analysis is something that top players rely on their coaches for, as it gives them an edge during matches.

Many top players now work with a team of professionals rather than just one coach, and this team can include people like nutritionists and physiotherapists who are highly competent in their specific field.

High performance tennis coaches have one of the most demanding jobs in world sport, but the rewards for their efforts are also incredibly high, which is the reason many are drawn to the role.

Tennis Coaching Tips: How To Communicate With Your Players

Tips To Start Off Your Tennis Playing Career

Tennis Nutrition: How To Get Fitter And Leaner For Your Tennis